The store will not work correctly in the case when cookies are disabled.
1878-1904 Morgan Silver Dollar BU (Random Year)

Most Competitive Prices in the industry
FREE Shipping on all orders above $99
In stock
Item is available and ready to ship!
SKU
Morgan Silver Dollar BU Random Year
Volume Pricing
As low as $40.44 per unit over spot
Be the first to review this product
$55.17 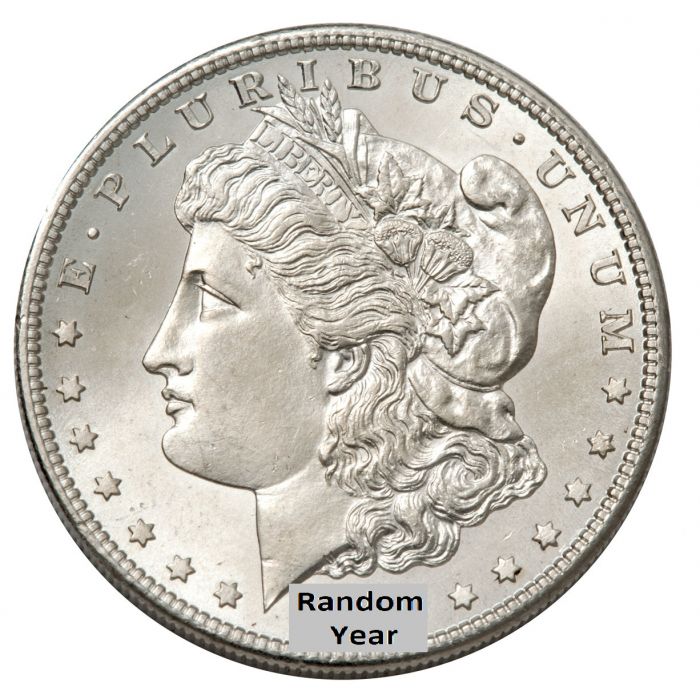 Skip to the beginning of the images gallery
Description

One of the most popular coins among collectors in the United States is the Morgan Silver Dollar. The coin is one of the most iconic ever minted by the US Mint system, and to this day collectors seek out this coin to add to their collections.

Reverse: Features a bald eagle clutching an olive branch in one talon and a bundle of arrows in the other. Surrounding the eagle is "United States of America," "One Dollar," and "In God We Trust."

The Morgan Silver Dollar is named for the Assistant Engraver at the US Mint in 1878, George T. Morgan. His profile portrait of Lady Liberty is featured on one side of the coin, while the image of a bald eagle is featured on the opposite side. Morgan Silver Dollars were produced from 1878 until 1904, when silver stores purchased for the minting of the coins were depleted. A special, one-year minting also took place in 1921.

Morgans design for Lady Liberty featured a left-profile portrait of Liberty on the obverse side of the coin, with the phrase E Pluribus Unum engraved over her head and the year of minting engraved below. On the reverse side of the coin, the bald eagle is featured with its wings outstretched, and its talons clasping an olive branch and arrows. The phrase United States of America is stamped above the image, with the phrase One Dollar stamped below.